So.... FRACK IT! The court route is too corrupt to be relied on.

The only other choice now is to RECALL THE CESSPOOL BOTTOM FEEDERS that have allowed an illegal alien to steal the white house and to train-wreck our nation.

EVERY PUBLIC OFFICIAL IN AMERICA NEEDS TO BE RECALLED! PERIOD!

So, today on FRIDAY THE 13TH, DECEMBER 2013 "THE MOTHER OF ALL RECALLS" BEGINS ANEW.

If there are any RESISTERS out there that want to help, then click on this link here. But if you are a COLLABORATOR and have the typical Marxist mindset then you are our enemy and you are an enemy to the once living Constitution. YOU CAN GO TO HELL! 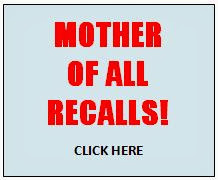 Posted by Edward C. Noonan at 7:48 AM No comments: