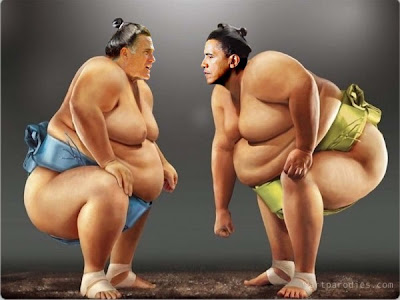 Sumo Wrestling: "A Japanese form of wrestling in which a fighter loses if forced from the ring or if any part of his body except the soles of his feet touches the ground."

Mitt, the native Sumo champion of Mexico, and Barry Soetoro, the native champion of Kenya met in the locker room of the University of Denver and growled at each other. The pose shown above was kept by both opponents and they did not move a muscle for 90 minutes. They just glared and looked at each other for the entire time.

Fox News complained saying it looked like Soetoro was “bowing” to the ex-governor. 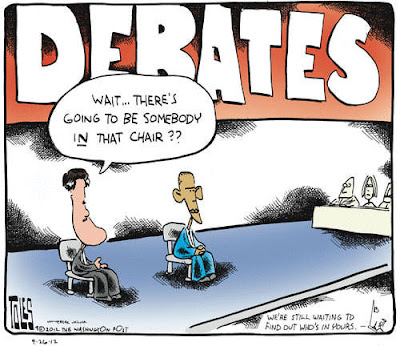 Mitt admitted he was disappointed. He thought no one would be in the chair next to him… (See news photo above!)

A newly scheduled match will be next month between BIG BIRD and the Latino un-favorite “Mitt.” Big Bird claims the Mexican hooligan slighted Mr./Ms. Bird with irritating words and references during last night’s meet. Bird claims it was workplace harassment.

Even though Romney is a dual citizen with Mexican blood and heritage, most Latinos will not cheer for Mitt. Instead, they favor Kenyan-born Barry Soetoro.

Stay tuned for more sporting news…
Posted by Edward C. Noonan at 9:35 AM No comments: